I read a LOT of Holocaust lit as a kid (Jasper, Lisa, Daniel’s Story, Endless Steppe, Number the Stars, Diary of Anne Frank, Devil’s Arithmetic, and more). I know I watched Schindler’s List in middle school, but I don’t remember if seeing that movie was what led me to the books, or whether the timing was coincidental. At any rate, after my young adult binge, I…never really touched the topic since. It can be so exhausting to mentally put yourself in that place (thank god, of course, that I have the luxury of taking the break).

But last year, I began working at the Azrieli Foundation, which publishes the memoirs of Holocaust survivors who immigrated to Canada. At the time, they had published 20 English language stories, although I believe that number is now 21. I was given the entire library to read, and it took me about a month to work myself up to the challenge.

What finally pushed me to start reading the books were the videos. The Foundation has also begun releasing short movies of survivors who have published memoirs with them. The movies feature a mix of book excerpts, interviews with the authors, and animation. I watched these videos during an afternoon of booth-manning, and not only did I finally feel ready to read the books, I also felt like I needed to. The videos were incredibly effective because once you hear them speak, and see them communicate, you (or at least I) feel the need to know them better.

Zuzana Sermer is a very thoughtful and articulate woman, and her memoir is probably the most novelistic of the ones I’ve read. One simile that really stuck with me was her comparison between Communism and zoos, and war, somewhat, and jungles. “Inhabitants of a zoo may be safe,” she writes, “but they are helpless captives without the richness that makes life worth living.”

I’ve reviewed 4 of these memoirs already. It’s difficult to find new things to say after reading and reviewing so many of a similar type of book, so I’m going to end with the following, which comes from my previous review and states my feelings as clearly as I can phrase them:

These people come from all over the world and have experienced anything from convents to concentration camps.  I don’t feel comfortable rating these books – they’re personal and historical documents, not intentional works of literature, so I’m temporarily shelving my star system for now. However, I did want to review them, because I think they deserve to be read, thought about, and remembered.

Each memoir is unique and fascinating, and each has a worthy and important story to tell. On the one hand, this is so obvious as to become trite (everyone has a story to tell! everyone is important!), but on the other hand, it is an important reminder that we can never know the full story of any situation, and there are as many sides to the same story as there are people to tell it. 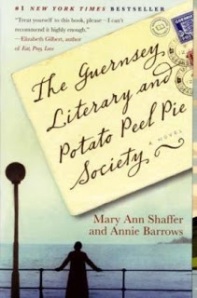 The last time I wrote a book review (Stargirl), I began by saying, “I have been incredibly busy lately finishing up the memoir project, as the deadline for the completed manuscript is the end of this month. So perhaps staging this “one post per day” nonsense could have waited until next month, but oh well.”

Then it turned into a 600+ word review, so I got rid of that intro. But I’m using it for this review, because damn, February was a stupid month to choose for this project.

First, I would like to point out that if you are going to have a book take place in Britain, with characters from Britain, consisting of the letters that these British characters from Britain are writing to other British Britains, then you bloody well spell “honour” with a U, dammit! I’m not sure who is to blame for this, the publishers, the editors, or the authors, but come. on.

As for the actual story itself? Well, I found it endearing. Of course, it was incredibly cutesy (like Stars Hollow on rainbows), and most of the main characters lacked any actual human flaws. Also, and this is a common problem in epistolary novels, most of the many different characters’ letters – male and female, old and young, educated/literary and not – read suspiciously like they were written by the exact same person. I’m sure developing a unique voice for 10+ original characters is a difficult job, but them’s the breaks if you choose to structure your novel through letter.

The Guernsey Literary and Potato Peel Pie Society reminded me of nothing so much as The Secret Garden – so, so sickeningly sweet, and everyone is ridiculously wonderful, but you don’t really care because sometimes people really can be like that, and it works. There’s room in the world for books like this (and room for books like The Big Sleep, equally).

In short, hating this book is kind of like hating a litter of puppies. Most of the time, it’s just adorable and solves all the problems in the world, but every once in a while, if you’re feeling particularly bitter, all the cuteness might make you feel a bit…stabby.

(Ok, this review also isn’t as short as I thought it would be. Hurrah for long-windedness.)